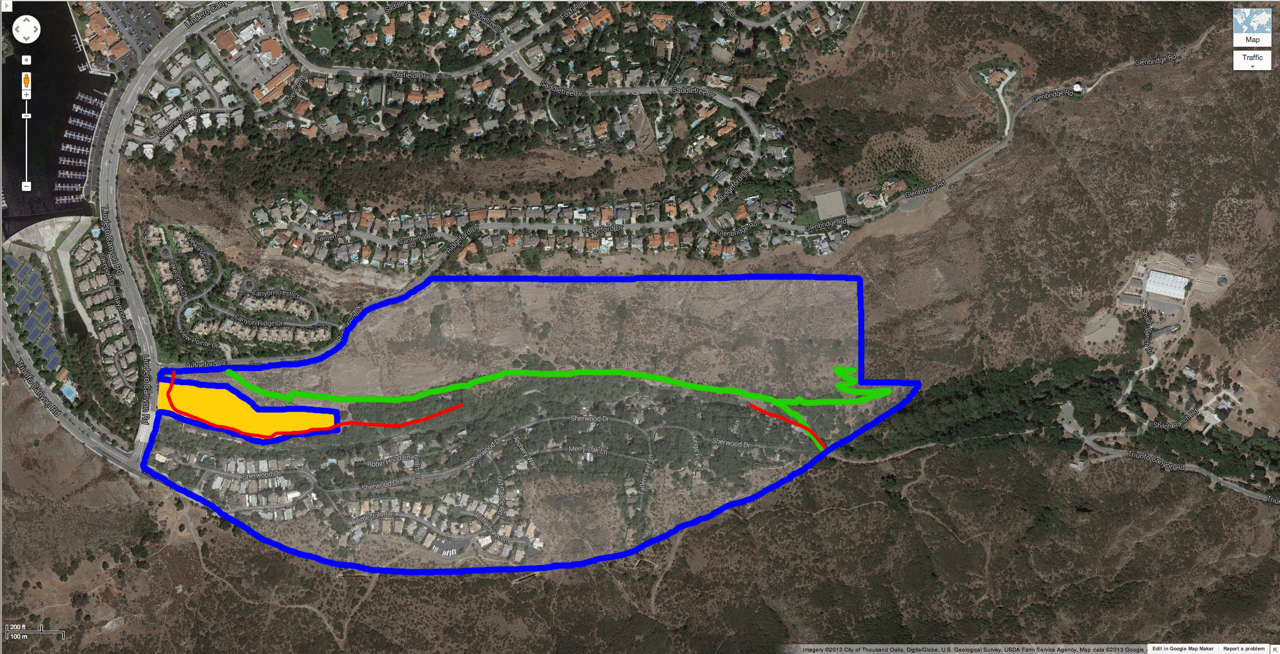 One of the issues that will likely come before the city council in the future, is the possible uses of the 4.4 acre property that is surrounded by Oak Forest Estates, Lindero Canyon Road, and Ridgeford Drive. For those that don’t know, this is the area East of the Lindero Bridge, North of Triunfo Canyon Road. This area has had issues with vandalism and mischievousness. A few years ago, there was even an injured kid riding BMX that had to be airlifted from the location. The BMX track has since been dismantled, presumably by area residents.

Years ago, this property was a parking lot for motorhomes, and other long term parking. That hasn’t been the case since Three Springs was developed in the late 1980’s, and the bridge was widened. And, in years past, the area has been looked at by a variety of different groups as well as looked at by developers to build anything from apartments to assisted living. In fact, the State of California mandated the City to zone for more low income housing, and this was one of the locations the City looked at.

Over the past several years, many residents, in particular those who live in Oak Forest Estates and in the immediate area, have asked the City to find a way to preserve that space and keep it from being developed. The City found a way to purchase the property, in part with grants, as well as tax credits. That said, the purpose of the grant is for development of a hiking trail and trailhead improvements … making the existing trail accessible through the area.

Some people have asked for a passive trailhead, others suggested no public access at all, and still others a park or dog park, as well as other ideas. Nearby residents are concerned about traffic, parking, and noise.

The City has not yet begun the public process to hear residents on what they’d like to see done with the property, as well as the concerns that they may have. The City Council members will ultimately need to balance the qualify of life of nearby residents with the commitments to the grants, and the wishes of all residents in the City (since City funds were used).

What’s interesting about this property is that it doesn’t border Ridgeford, nor most of the creek next to and north of Oak Forest Estates. In fact, most of those areas are owned by Oak Forest Estates HOA. The only place it borders is actually Lindero on side, and the open space on the other.

On the enclosed picture (a Google Map combined with public record parcel information), the area outlined in blue is the parcel owned by Oak Forest Estates. The yellow area is the 4.4 acre “Ridgeford Parcel.” The green line is the existing trail easement (e.g., the one currently in place). And, the red lines are the historic, unimproved trail thats been used over the years by hikers in the area.

There are two grants that the City of Westlake Village has obtained for the Ridgeford Parcel. The first grant of $113,837 was for acquisition of the 4.4 acre parcel for a future hiking trail. This grant has been closed, and the City now owns the property (it was acquired a couple of years ago). The second grant of $500,000 is for the development of a hiking trail and trailhead improvements. These passive improvements are things like landscaping, irrigation, picnic amenities, and fencing (on the 4.4 acre parcel as well as on the trail easement).

If the City does not, ultimately, create a parcel that has at least some relation to trails, then there are likely ramifications since the grants were obtained to create trail access (although it’s unclear what the ramifications would be for the City). The current “grant performance period” currently ends in June 2014. This is when the project needs to be completed and the project “closed out.” The City has not determined if the grant period can be extended.