What’s up with “the wall”? Dole Development Info 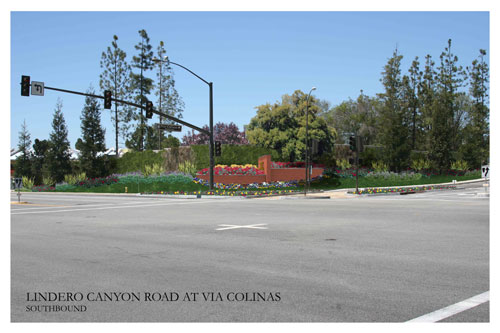 The City Council agreed to a 6 story building in exchange for a development with less traffic, more revenue, and a diversified revenue source. In addition, by having the hotel have a smaller footprint, the city was able to work with the developer to create additional amenities to benefit the city and schools. The wall is expected grow in fairly completely by September 2008. The plain block is the best material for the long term because the vines stick to it best. See the projections pictures at www.westlakerevelations.com/070123-DoleInfo.html.

The Questions Being Asked

One of the questions that I get asked about is “Why is the Four Seasons so tall?” and “What’s up with ‘the wall’?”, “Why are the trees so small outside?” Or the other question: “Why did they build it so tall?”

The development is built. Some like the way it looks, and others don’t. If/what/how the complex should be built is long behind us. And, whether you like it or not is up to you. But the above questions are still abound … and I thought I’d answer them.

The Dole complex includes the Dole HQ office building, the Wellness Center, TV Studio and the Four Seasons hotel. And while many would say that the inside of the campus is gorgeous, the outside of the outer wall and the height of the building bother others. Many have commented on the size of the wall, the plain cinder blocks, and more.

Here’s what’s happened, why the building is six stories, and what the planners are expecting to see.

When the developer (Dole Chairman, David Murdock) was talking with the city, there were two realistic options: more office buildings or the Four Seasons/Wellness Center. Murdock had the contractual rights (e.g., entitlements) to build office buildings (additional to the Dole HQ). But, the city was looking for three things: diversified types of revenue, greater revenue streams (compared to minimal revenue from offices), and less traffic.

The traffic that we notice currently in Westlake Village is mostly office building traffic (note the peaks around rush and lunch hours). With approximately 3000 Westlake Village households, a generous best guess is that 500 people live *and* work in Westlake Village. That said, the working population tops 11,000 during the work day, on top of another 8,000 or so residents. That’s why you see such peak traffic week days during the morning rush hour, lunch time, and the afternoon rush hour.

Hotel traffic is not only less than office space, but at different times. And, by allowing the hotel, the city was able to put itself in the position of being able to enforce mitigation (shifting office hours, governing event timing, etc…) if there was too much traffic from a hotel. This is control they wouldn’t have had with office space on this property.

Over the past 25 years, the city has seen the State of California reach into into the city’s revenue streams and take it away. Sales tax is one place this has already happened, but there are others. With a hotel, the city has put in place a 10% “bed tax” as do many other cities (typically 8-12%) which arguably cannot be touched by the state or the federal government. This is one way to diversify the revenue streams for the city.

If Murdock were to build more office buildings, it may have only contributed $100-200,000 per year in city revenue. The Four Seasons and Wellness Center, are expected to contribute more than $700,000.

So, the city council thought it best to have a hotel to avoid increasing traffic, diversify revenue sources, and get more revenue into the city for the future. But, to do that, they would have to compromise and make exceptions.

The entitlements for the building gave Murdock the ability to build a 4 story hotel. Apparently, hotels work best when the distances the staff needs to travel inside the hotel are smaller. So a taller hotel, with elevators works better (logistically and financially) than a shorter hotel with a bigger “foot print”. There are some reports that Murdock gave the city a choice — allow for a 6 story hotel, or he would build the hotel elsewhere (he owned another lot around San Jose).

But more importantly, by allowing for the 6 story hotel, it created more room for things like the Wellness Center, and a TV Studio on the property. These are resources that Dole will be working with the school district and the city so that they can help the community. Bottom line: the height of the hotel is not a standalone item — it was part of a package.

Considering all the information, and it was complex, the city council thought it was in the city’s best interest to have the hotel and other parts of the complex, and made the exceptions necessary.

What’s up with the wall?

If you’ve not driven around inside the Dole complex, I encourage you to do so. It’s very different from the outside.

Some would say “why is it so finished inside, when it looks so plain outside?” That’s a bit of a misconception. Let me explain.

Murdock needed a wall of this breadth (and height) as a sound wall. Sound walls are very effective in deflect the sound for up to 150 ft inside the wall. The hotel wants to have outside events (e.g., weddings), so they not only have the sound wall, but a waterfall to mask the freeway noise.

The developers, along with the city, determined that the most effective and attractive way to have the wall would be for it to be hidden by massive amounts of greenery — trees, vines, etc…

They used plain cinder blocks not only because they were economical, but more importantly, because this is the best type of surface for the tendrils of the vines to grab into, spread, and stay connected. Had they used a stucco or other type of covering to temporarily make the wall look better, the plants wouldn’t stick to the wall as well, or grow as fast.

In addition to the vines, they planted a large number of Carolina Laurel Cherry trees which grow fast and dense — with the ultimate goal of a solid green, rich look. (For those plant people out there: this is an ornamental shrub/tree known for fast upright growth and deep green leaves. Small creamy white flowers in 1 inch spikes from late winter to mid-spring followed by inconspicuous black fruit.)

They planted some smaller trees and vines on the inside of the wall, but the vast quantity of the trees, and the larger coverage trees are on the outside (aka street) side. Similarly, the outside has bigger vines and bigger trees compared to the inside.

Now, you may think that I’m nuts at this point — what about those big tall trees we see? I thought the same thing. There is a couple dozen of these as part of the landscaping. They are pretty far inside and away from the wall. They are relatively few in nature when compared to the large number of trees outside of the wall. They also have a different purpose. Clearly, the pine trees are there to screen the visual impact of the building to those outside, as well as for those inside the hotel to screen the visual of the street/freeway. But they are also the wrong kind of tree to camouflage the wall and fill in densely as they don’t fill in at the bottom.

The Open Space, and “A picture is worth a thousand words”

I didn’t realize it at first, but the public is welcome to walk around the open space around the hotel. If you park, you may have to pay for parking. Many would consider the grounds beautiful, and I encourage people to go and check it out … it’s a very different look from the other side of the wall. You enter in off of Via Colinas.

The developer created projections of plant growth as of September 2008. Since these pictures at www.westlakerevelations.com/070123-DoleInfo.html

Hope that answers the question of “what’s up with the wall?”

As always, drop me a note as to what you think, comments you have, or suggestions for future articles. 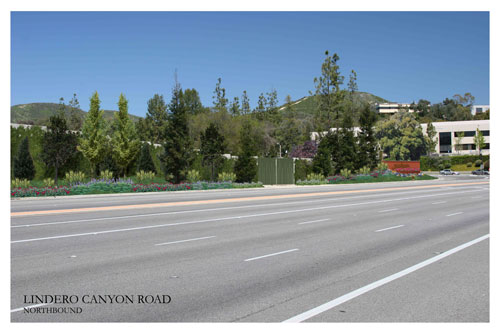 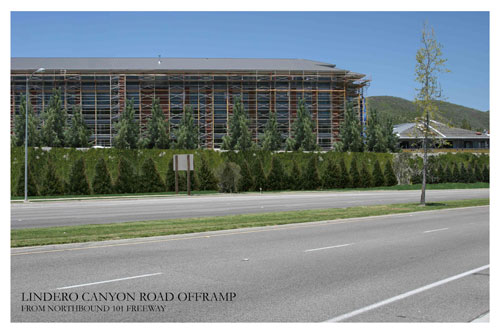